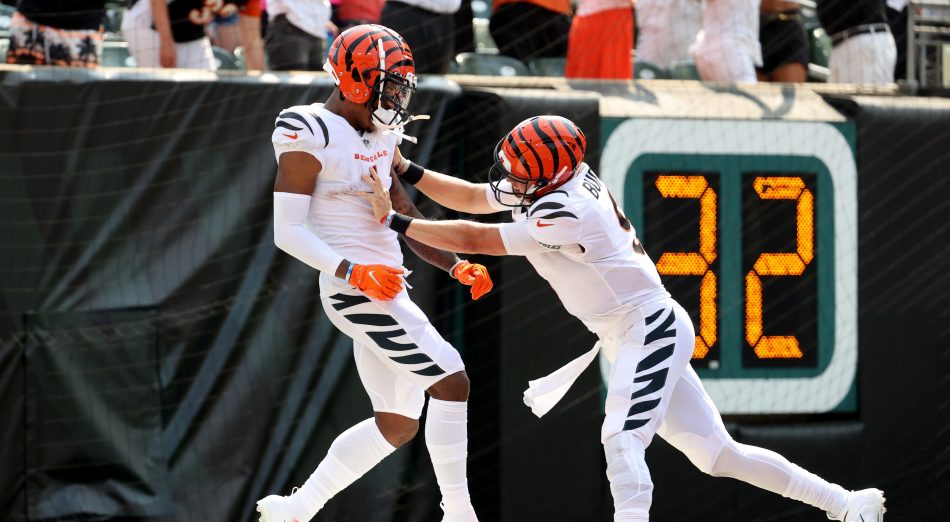 We are breaking down the top 100 players entering the 2022 NFL season and we’re down to #30-21. This group is highlighted by multiple players who played in the 2021 Super Bowl.

The 2021 comeback player of the year in Joe Burrow truly marked what it means to make a comeback. Not only did he personally come back from a season-ending injury in 2020, he led the Bengals who had just missed the playoffs all the way to the Super Bowl where they narrowly fell to the Los Angeles Rams. The Bengals invested more into their offensive line this off-season which should pave the path for a chance to redeem themselves this year.

Another team that has invested heavily into their offensive line is the Miami Dolphins. The Dolphins have had a lackluster offense for several seasons with very few bright spots. The offensive line wasn’t helping the case for Tua’s start or helping the young running backs develop. Bring Terron Armstead into the picture, an all-pro left tackle and this is set to be a stronger line and significantly improves the offense.

One of the most underrated players in the NFL is Matthew Stafford. He had to deal with awful coaching and situations in Detroit for years putting up numbers even after Calvin Johnson retired. Stafford was traded from the motor city to Los Angeles and in his very first season he put up career high numbers and led the Rams to be Super Bowl Champions. Stafford was very deserving of this ring and proves he is one of the more elite quarterbacks in the league.

The Minnesota Vikings didn’t need to wait long after Adrian Peterson’s career in Minnesota was over to find their next running back of the future as they found a gem in Dalvin Cook who was the all-time leader in rushing yards at Florida State. Cook has since exploded onto the league leaders in rushing over the last 3 seasons with over 4,800 total yards and 35 touchdowns in the regular season during that span. If Cook can continue to weather off the injuries, he’s in for another monster year for Minnesota.

Ja’Marr Chase makes his debut on the list all the way in the top 30 at #26. The Cincinnati Bengals decided to pass on drafting an offensive lineman and opted for reuniting Joe Burrow with college teammate Ja’Marr Chase which paid off well for the Bengals. Chase won offensive rookie of the year and made it to the Pro Bowl as he racked up over 1,400 yards on the season which broke the previous record set by a rookie in a season by former LSU teammate Justin Jefferson. On top of that, 266 of those 1,455 yards on the season were in one game which is the most by a rookie receiver in a game all-time. Quite an impressive start and a great draft selection by the Bengals who could easily make a run at another Super Bowl.

After winning defensive rookie of the year in 2018, Shaq Leonard has done nothing but tear up the league with 3 straight Pro Bowls and being towards the top of the tackles leaderboard each season. Leonard is the stronghold on the tough Colts defense and makes it hard for running backs to get past him.

Arguably one of the best undrafted players currently in the NFL, JC Jackson is reminding us of Revis Island from the 2010’s. Jackson has been brutal on receivers in coverage with leading the league in passes deflected with 23 in 2021 and having a combined 17 interceptions across the last 2 seasons. This lockdown defense earned him a pretty hefty payday from the Los Angeles Chargers.

One of the best tight ends to ever play the game, Travis Kelce is continuing to dominate the position year after year. He had over 1,000 yards receiving in 6 straight seasons with one of those seasons breaking the NFL record for most yards in a season by a tight end. With Tyreek Hill traded to Miami, this provides even more opportunity for Travis Kelce to get the bulk of the passes thrown his direction.

The 2014 1st round pick has made a Pro Bowl all but 1 season due to injury. He also is one of only 5 offensive lineman to make a Pro Bowl in each of their first 6 seasons in the league. There’s a reason why Martin was made the highest paid guard a couple seasons ago by the Cowboys as he’s proven himself year after year.

One half of the best sibling duo in the NFL is the Los Angeles Chargers linebacker Joey Bosa. Joey Bosa has been leading the Chargers defense for years and now finally has some help brought in with the additions of Khalil Mack & JC Jackson. With other talent being added to the equation, we think this will help set up Bosa for even further success.