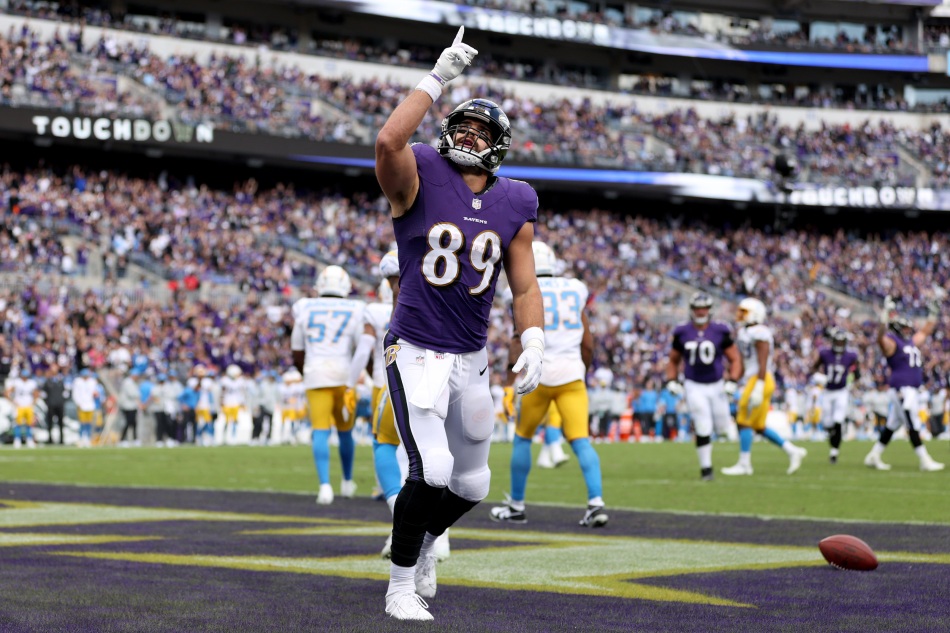 We are breaking down the top 100 players in the NFL entering the 2022 season. We’re on spots #40-31 and this group features a group of players who rose to the occasion in 2021. These players could all move their way up even further on this list in 2022 if they keep up the pace they’re on.

Crosby makes his debut on this list in the #40 slot. Stats don’t do enough justice on how much of an impact Crosby made on the field. With the quarterback talent in the AFC West this upcoming season, they better be fearful facing the black & silver Raiders as they have a top edge rusher on their line. Crosby was a key reason the Raiders made their first playoff berth in several years.

After an injury cut his 2016 campaign short, Allen has been on a surge winning comeback player of the year in 2017 and making 5 straight Pro Bowls. With a gunslinger like Justin Herbert at quarterback, it’s really allowed Allen to continue to thrive at his age and is showing little signs of slowing down.

The current record holder for most consecutive seasons to start a career is Mike Evans with 8 which is how long he has been in the league for. Evans has consistently produced every year whether he had NFL legend Tom Brady as his quarterback or someone like Mike Glennon throwing the ball. Evans has been one of the better receivers for the last decade and since Brady has been in the picture, it’s allowed him to earn a Super Bowl Ring and have career years.

After only playing half a season in 2020 due to injuries, Kittle bounced back with a career high in touchdowns and another Pro Bowl honor. Kittle along with Deebo have been the two consistencies on the 49ers offense through the Jimmy G & Trey Lance saga which seems bound to happen once again this season.

The former Heisman trophy winner & NFL MVP award winner is hoping to get back to the form he had a couple seasons ago. This hasn’t stopped him from continuing to put up highlight reels when he is playing as he is one of the most dynamic quarterbacks in the league.

A versatile player on the defensive line who has played at both defensive tackle and end is Chris Jones. When lining up at end, Jones looked to take a step back in his career, but after getting Melvin Ingram in a deal, the Chiefs moved him back to defensive tackle where he looked to shine in his natural spot earning him yet another Pro Bowl honor.

Before the 2021 season, the Ravens signed Andrews to a 4 year extension with almost $40 million in guaranteed money. This is a large contract for a tight end and for someone who hasn’t broken 1,000 yards receiving in a season yet. Andrews went and proved himself immediately with a 100 yard game in week 3 and over 1,300 yards which was 6th amongst all pass catchers which is a very impressive feat. With Marquise Brown traded to Arizona, Andrews has an opportunity to surpass his already dominant 2021 campaign as Jackson’s top target.

Despite spending a season with the Jimmy G & Trey Lance saga, Deebo Samuel found a way to put up monstrous numbers in 2021 with over 1,700 total yards and 14 touchdowns. With the future of the 49ers uncertain and seeking more money, Deebo requested a trade after that season. Without finding a trade partner, the 49ers and Samuel came to an agreement with a large 3 year contract to keep him in the bay area. This was a huge win for 49ers fans as they get a dynamic receiver who can make plays happen.

After an injury cut his 2020 campaign short, Dak took charge and led the Cowboys back to the playoffs in 2021. Prescott was snubbed for the Pro Bowl in 2021 and lost out on comeback player of the year to Joe Burrow. Prescott is still an elite quarterback as he enters 2022 without Amari Cooper & has an aging Zeke in the backfield. The Cowboys might look a bit different, but we expect Prescott to command this team back into the playoffs in 2022.

The defensive end didn’t emerge as a starter until his 3rd season where he only started 3 games and then in his 4th & final year with the Saints in 2020, Hendrickson started every game he played in and exploded onto the scene putting up 13.5 sacks. This drew significant interest from the Cincinnati Bengals who were moving on from long-time defensive lineman Geno Atkins. The Bengals signed him to a huge deal and it paid off as he capitalized on that 2020 campaign with an even better season in 2021 with 14 sacks in the regular season and helped turn the Bengals defense around.