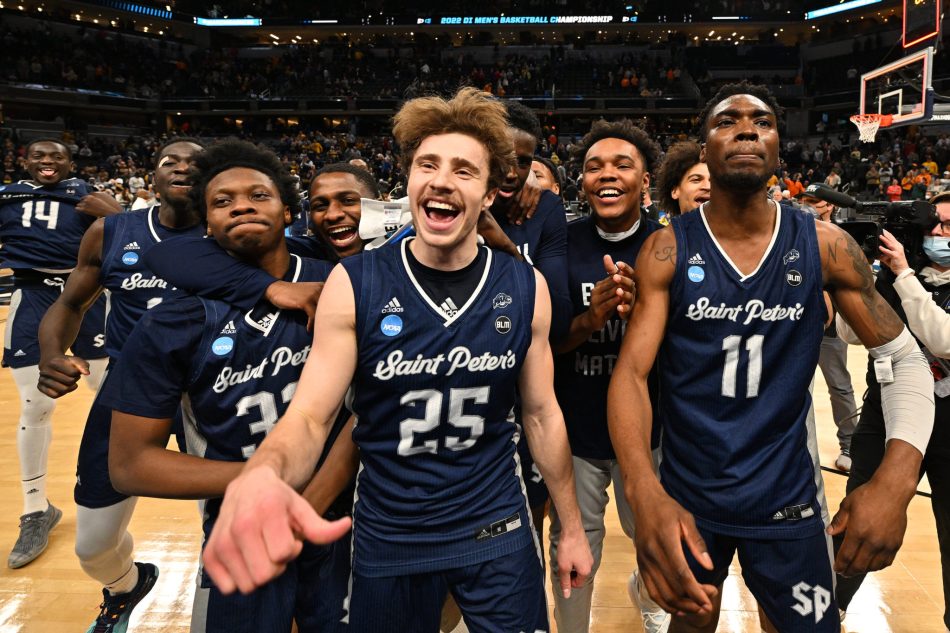 The Sweet 16 is here and all the teams who have made it to this level have battled their way to get to where they are. This has been an insane first two rounds of the tournament filled with upsets, overtime thrillers, and incredible performances. Of the 16 teams remaining in the tournament, we’ll be taking a look at each of them and reranking the 16 teams left.

The #1 overall team in the country entering the tournament and for good reason, the Gonzaga Bulldogs have continued to make a case through their first two games on why they deserve that spot. Drew Timme and Chet Holmgren have been superb for the Bulldogs and justifying their case for the NBA draft.

The #1 seed in the midwest faced a tougher than expected round of 32 matchup as did many teams on this list, but edged out Creighton in the final minutes to move on to the sweet 16. The Jayhawks have something a lot of teams in this tournament don’t and that is depth. They might not have a superstar on their roster, but they have so many different players to choose from to make a suitable lineup.

With a crazy end to regulation, Arizona had to duke it out with TCU in overtime to move on. The Wildcats led by Benedict Mathurin, the Pac-12 Player of the Year finished the game with 30 points and came up huge in clutch scenarios which is a trait that many NBA scouts are looking for. With the upset threats that loom ahead, Mathurin will need to continue to keep playing at the level he is for this team hopeful to make the NCAA Championship.

The first non-#1 seed we have in the reseeded rankings is Houston who is a #5 seed in the tournament. Houston certainly hasn’t played like a #5 seed with their beatdowns of 12 seed UAB and  the more impressive 4 seed Illinois. The Illinois were a potential final 4 team with star Kofi Cockburn who just got shut down by the Cougars defense. The Cougars were winners of the American league with only a mere 5 losses on the season and trying to prove to critics why the American league should be considered a Power conference as it has produced some real talented teams in recent years with 3 teams in the tournament field this year.

Villanova sits in a familiar position as a sweet 16 team in a packed field. The Wildcats have won 2 tournaments in the last 6 years and could very well turn that into 3 this year. The Wildcats took down Ohio State with ease and Jay Wright is making his mark on the Hall of Fame case he is building for himself.

After making the tournament last year as one of the last 4 teams in and going on a miraculous run to the final 4, UCLA entered this year’s tournament as a #4 seed despite the injuries they endured throughout the season. UCLA is still getting their footing, but if they get to that groove, Johnny Juzand and company have what it takes to avenge their disappointing end to last season and potentially knock down Gonzaga in the final 4 this go around.

Slated as a popular #13-#4 upset pick in the round of 64, the Big East regular season champion has won their last two games by a combined 37 points. The Friars have had an easier matchup than most as they’ve been fortunate to face two double-digit seeds so far and their real test will be against #1 Kansas who has looked dominant. Nonetheless, during their games they have still shown promise to be competitive against Kansas.

Purdue comes into the sweet 16 as the highest seeded team remaining in their region after #1 Baylor lost to UNC and #2 Kentucky lost to Saint Peter’s in incredible fashion. Purdue should be thankful for not being one of the teams to be upset thus far and is going to fight off the Peacocks in this one. Purdue should not take this team lightly and be ready for the test as they’ve already had to endure a couple tougher ones so far.

In Coach K’s final season, the Duke Blue Devils have made it to the sweet 16 so far and are looking for one last dance. It’s been a scary ride to here so far after almost being upset in the round of 32 and their disappointing end to the season in the ACC tournament. It’s a surprise Duke made it out of selection sunday as a #2 seed. Duke is not looking like the #2 seed and is a fringe 4 or 5 seed right now.

Duke is going to have its toughest battle yet in their next matchup as they face the Red Raiders of Texas Tech. This could very well be another low scoring affair as the Red Raiders are one of the best defensive teams not only left in this tournament but in the country. Texas Tech and Duke enter this game as two higher seeded teams who have struggled but are looking to bounce back onto their feet with a statement victory.

The first of the upset teams that remain in the tournament is the Miami Hurricanes. The #10 seed narrowly upset the #7 USC Trojans before absolutely throttling the #2 Auburn Tigers. The Tigers were Final 4 Favorites and the Hurricanes busted many brackets. In an 18 point victory, the Hurricanes will face another double digit seed hungry to make the Elite 8 in the Iowa State Cyclones, in what will be a storm for the ages.

In the other ½ of the weather storm team names facing off against one another, the Iowa State Cyclones are hungry for their first Elite 8 appearance since 2000 and first Final 4 appearance since 1944. If any team can get over the hump, it’s going to be this one, the Cyclones are upset-minded after taking down LSU & Wisconsin in their first two games after getting destroyed by Texas Tech in the Big 12 tournament by 30+. The Cyclones are looking to prove to the doubters that was just a fluke performance.

In Hubert Davis’s first year as head coach, he has led the Tar Heels to the Sweet 16, not bad for a first timer and long-time assistant. The Tar Heels are looking like they made the right choice, especially after taking down the defending champions in the round of 32. The Tar Heels did blow a 25 point lead and narrowly escaped to do so, but still won. If they held the lead in a more confident manner, we would have placed them higher up on this list, but keeping big leads is crucial in this tournament.

Michigan is the 3rd #11 seed to make the sweet 16 as the double digit seed has been a roll this year. The Wolverines somehow were not one of the last 4 teams in the tournament and did not have to endure a play in game. Michigan lost their last 3 games of the season including a loss to Indiana in the Big Ten which had us surprised that they made it to where they are now. They had a lucky #6 draw with mid-major Colorado State and then pulled off a huge upset against Final 4 contender Tennessee. We still don’t believe in the Wolverines and think they are going to be shown why they shouldn’t have made the tournament against a strong Villanova team.

Arkansas has had the privilege of playing two double-digit seeded teams to start the tournament. In both games, Arkansas barely won and should have been eliminated in both, but won with luck on their side and a little bit of thanks to the officiating. Arkansas should not be here, but they somehow prevailed enough to play Arizona in the sweet 16. We only have them ranked higher than Saint Peter’s for what we’ve seen from them throughout the season.

The Saint Peter’s Peacocks have made history as only the 3rd #15 seed to ever make the sweet 16. The Peacocks led by Doug Edert have taken down Kentucky & Murray State in incredible fashion. We hope they can continue the magic against Purdue but we’ve never seen it happen before and don’t know how long this streak can continue.  Will Saint Peter’s make history and be the 1st to ever do it?