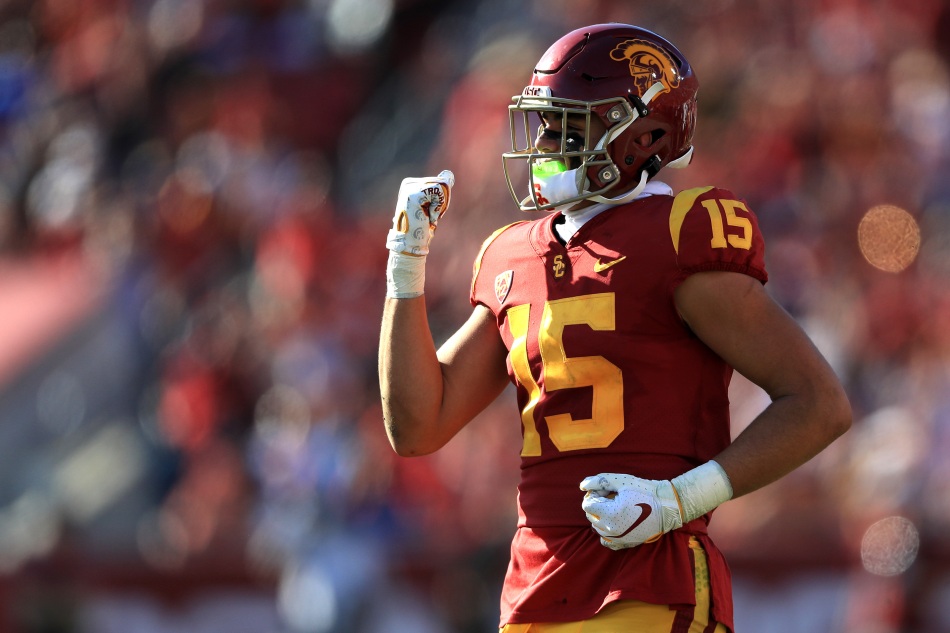 In recent years, we have seen multiple early 1st round draft picks end up as busts or on the path to becoming one. These were all players that were coming off a great last season of college, overhyped and failing to live up to expectations. Predicting which players will end up enduring this fate is a tough challenge. For this year’s class, we’ve analyzed the prospects rated in the top 2 rounds and have put forth our top 5 players with the highest bust potential.

In a weak QB draft class, one of the few prospects that several teams such as the Atlanta Falcons, Carolina Panthers, and Pittsburgh Steelers amongst others have been linked to is Pittsburgh QB Kenny Pickett. After 3 years of mediocrity as the starting quarterback, Pickett finally came into his own looking like true pro-level talent throwing over 4,000 yards and 40 plus touchdowns. This was the best season a Pittsburgh quarterback has had since Hall of Fame quarterback Dan Marino had nearly 40 years ago. The fact it took Pickett until his 5th year of college is concerning for pro scouts that he has a low ceiling and there’s not much more room for growth from here. Pickett also put up these numbers in the ACC which is not a strong conference in college football and the competition level in the NFL is exponentially better. We can see Pickett still end up being the best QB in this class which isn’t saying much. Even with teams desperate for a quarterback, they’d be better off filling another gap and waiting another season or opting for veterans like Jimmy Garoppolo or Baker Mayfield who are still available on the market.

A top recruit coming out of the 2019 high school class, Stingley Jr. certainly lived up to that title with a phenomenal freshman season at LSU with 6 interceptions and 15 passes deflected. In the 2 seasons since, Stingley Jr. has only played in 10 games racking up a combined 1 fumble recovery, 5 pass deflections and 0 interceptions. It’s been 2 and a half years since Stingley Jr. hauled in an interception in a game and for someone who’s supposedly the top cornerback in this draft, the stats don’t lie. We hope Stingley Jr. can get back to his old form, but we’ve seen what injuries can do to top-tier talent and not just in football, but any sport, for example, in the NBA we saw top prospect Greg Oden fall to knee injuries after his dominance at the college level. Stingley Jr. is injury prone and if drafted in top 10 like projected has very high bust potential for that level of a pick.

The younger brother of star running back Dalvin Cook, James Cook has aspirations to have the career that his brother has been having. A lot of NFL scouts are hoping for the same thing and have been moving Cook up their draft boards as a result. We hope James has the success that Dalvin has, but oftentimes in these scenarios, we haven’t seen the younger brother live up to the success of the older one when it comes to non-QB positions. The last notable running back brothers that had success were the Barbers in the 2000s. With James Cook being touted as an early 2nd round pick based on his name, we’re not taking the chance on him, we see Cook as a receiving back who would work best in a crowded backfield as he has already experienced that during his time at Georgia. Cook is a late 3rd / early 4th round back that brings upside, but is nowhere near as talented as Dalvin was coming out of college.

Despite missing 4 games this season due to injury, Drake London was still declared Pac-12 Offensive Player of the Year for his 1,000+ yard season. A lot of his yards he was able to earn through his size. London is a very physical player who can outjump those who cover him. London uses this to his advantage, often winning 50-50 balls. This might work for him at the collegiate level, but he can’t just pray for the best at the pro levels. The cornerbacks and safeties he’ll be facing have the size and physicality to match up with him. One aspect of London’s game that we have yet to truly see is his ability to break free from coverage on his own which makes it concerning that he chose to skip running the 40 at both the combine and then his pro workout day. London seems to be hiding something on this front and hoping a team will jump on him way too early. This class is loaded with talented wide receivers and we don’t want to see another Philadelphia Eagles selecting Jalen Reagor ahead of Justin Jefferson type of moment.

One of the best stories of the draft is the incredible journey that Bernhard Raimann has come to where he is at today. Raimann grew up in Austria, didn’t play American Football until he was in teens and then after moving to the US, was able to get the chance to play Division 1 Football at the University of Central Michigan. Raimann was recruited to play wide receiver at Central Michigan before starting there as a tight end and then ultimately making the move to offensive tackle which was the best move for his future. Playing on the offensive line has drastically improved his draft aspirations and he continues to get better in each new position he plays. Raimann still has a ways to go in terms of skill level, adding more muscle on, and continuing to play as a lineman will earn him much needed experience. His ability to adapt has had scouts ranking him as high as a 1st night pick which we would love to see, but aren’t as hopeful. Raimann has more than exceeded expectations, but he is going to face significantly tougher opponents on the other end of the ball that will tarnish the reputation he’s earned as a 1st round prospect.