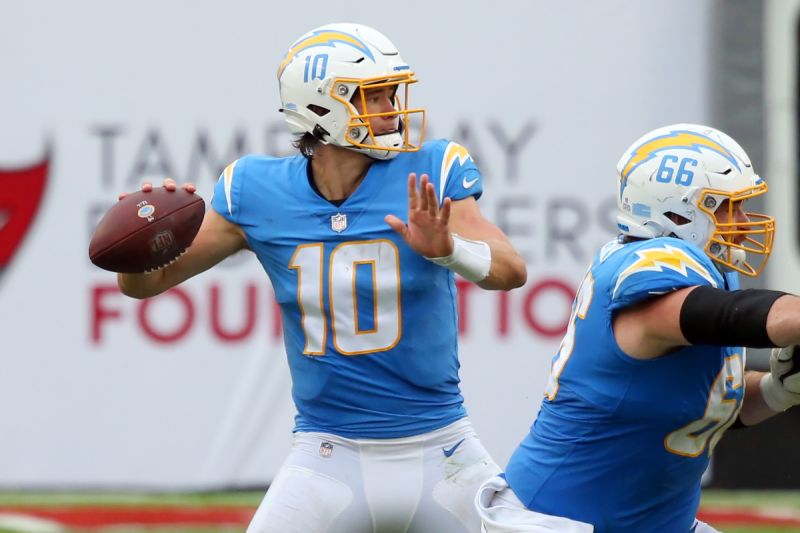 After a strong week 1 performance, Hurts and the Eagles cooled down with a close loss to the 49ers in a low scoring affair. The Eagles have a matchup they can’t wait for against division rival Dallas Cowboys. The Cowboys allowed Brady to stomp all over them in week 1, but held their own against Herbert last week. With a prime time Monday Night game headed their way, we expect this to be a shootout. Hurts is set for a big day.

Herbert’s had a slow start to the season with 2 underperforming matchups off the bat. Like the Eagles, the Chargers get a crack at the biggest threat of their respective division in the Chiefs. The Chargers have a shot as the Chiefs defense has been non-existent this season putting up 30+ points in back to back games against the Browns and the Ravens. The Chargers are gunning for the top spot and it starts with this game where Herbert will shine.

Another quarterback who has been rather disappointing for fantasy owners this year is Josh Allen. Josh Allen went from QB1 last year to QB19 in the first two weeks and that’s with playing the Dolphins. Allen should’ve had another touchdown in the game, but it was overturned which could provide some relief that he should’ve done better. The Bills have a tougher matchup against Washington ahead of them, but with Taylor Heinecke at QB, their defense is going to be on the field more often giving more opportunities for Allen and the Bills offense to succeed. We expect Allen to have a bounceback week and look like the top 5 fantasy QB we expect him to be.

The rookie QB is getting his first career start 3 weeks into the NFL season after starter Andy Dalton went down with an injury. The rookie QB is a trendy waiver wire add or bench stash that many people have been excited for. We aren’t excited for the first career start being against the Browns. The Browns are an up and coming team with a lot of potential to shine. Their defense looks better and we don’t love this matchup for the 1st round quarterback.

Derek Carr is the current leader in passing yards in the NFL by a wide margin as he’s led the Raiders to 2 straight victories to start the year. Carr should help the raiders get their 3rd victory of the season against the Dolphins in week 3 who are without Tua. The Dolphins limited both Mac Jones and Josh Allen this season being a tougher matchup against quarterbacks and receiving corps, but they did struggle against the run. With the Bills getting off to an early lead, they heavily leaned on the rushing game to develop their running backs which is what we expect to happen with the Raiders. Look to utilize Josh Jacobs or Kenyan Drake and fade Derek Carr.

Most weeks, Bridgewater will be a do not start option for many reasons, but we intentionally added him to the list for this week since people are looking to start anyone who goes against the Jets. The Broncos might be 2-0 but they have had one of the easiest strength of schedules so far facing the Giants and the Jaguars. Even in the first 2 weeks against those weak defenses, Bridgewater did not look like the QB that the Broncos were hoping for when they went out for him after missing out on Rodgers.