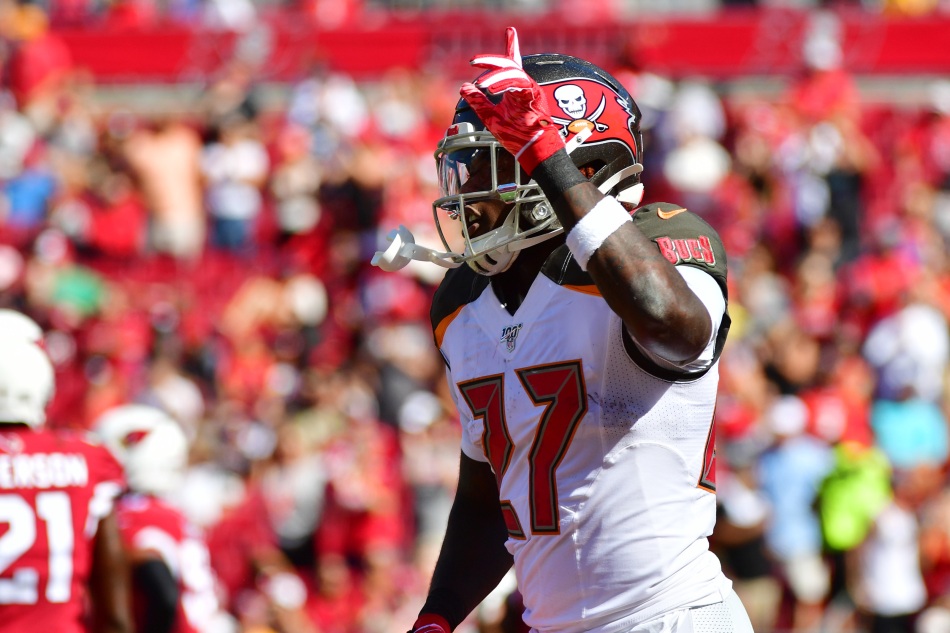 Week 6 saw plenty of exciting matchups, surprises and things to look forward to. We finally saw the highly anticipated debut of Tua for the Miami Dolphins at the end of the Jets game. Tua went to the 15 yard line after the game in honor of the injury he suffered during his college days to show that people can show endurance and power through the pain to return to playing. This past weekend also featured the return of Andy Dalton in the starting quarterback role after the horrific injury to Dak Prescott in the previous week. This weekend we will see more exciting matchups and hopefully the return of Michael Thomas from his injury in week 1 which will impact how you should set your fantasy lineups for this week. In this article, we’ll break down the players you should start in your lineup and the players you should sit. We intentionally exclude players such as Derrick Henry and Aaron Jones who should be in your starting lineup every week.

Ronald Jones – The third year running back hasn’t been able to get in the endzone very much but he has managed to rack up 3 straight games with over 100 yards on the ground. Jones had 2 of his 3 touchdowns on the season in his last performance against the Green Bay Packers. Good thing for Ronald Jones and the Tampa Bay Buccaneers is that the Las Vegas Raiders allow the 3rd most touchdowns to running backs this season. With Tom Brady’s elite passing threat and the high-powered offense of Tampa Bay, Jones should have several red zone opportunities to get in the endzone. Jones is set for a big day against the Raiders who can’t stop the run within 30 yards of the goal line.

Justin Jackson – When Austin Ekeler was healthy and the starting running back for the Chargers, Joshua Kelley was running back #2. With Austin Ekeler injured, Kelley still has remained #2. Justin Jackson has surprisingly leap-frogged Joshua Kelley for the starting nod and has been given the bulk of the workload. Jackson saw 59% of the snaps during his week 5 matchup against the New Orleans Saints. The Chargers are facing a weak Jacksonville Jaguars defense continuing to struggle which allows for the Chargers offense to get their first win since week 1. Justin Jackson will be the main benefactor alongside quarterback Justin Herbert for big statline performances, but don’t sleep on Joshua Kelley in the #2 position to get late-game scores. The Chargers backfield will have decent flex starts this week but Jackson will have edge over Kelley.

Devin Singletary – The Bills running back has only rushed for over 60 yards once this season and has a combined 57 yards on the ground in his last 2 games. This doesn’t sound promising for the 2nd year running back to be in your starting lineups this week. Thankfully, the Bills are playing the Jets who are a league-worst 0-6 to start the season. The Jets are atrocious and there is no other word to describe the mess of an organization. Players can just ask to be traded or released and the Jets management will just grant that wish. This could be the game that Devin Singletary needs to rejuvenate his season and get the ball in the endzone as he’s only managed to do so once this season. Singletary is a strong flex start this week alongside Josh Allen being one of the top quarterbacks to play this week.

D’Andre Swift – The rookie running back had his first breakout game of the season against the woeful Jacksonville Jaguars. Swift had his first career 100 yard rushing game and looked like a stud during the week 6 matchup. The Lions are facing another fantasy friendly team in the Atlanta Falcons whose defense has looked awful this season. However, this will be the game that Matt Stafford will go off and the game the Lions need to get their season back on track and keep their playoff hopes alive in the NFC wild card race. The Lions won’t need to do much running and this will be a high scoring shootout of 2 teams with subpar defenses. Swift is better left stashed away until we can see consistent performances from the inexperienced player.

Le’Veon Bell – After demanding to be released or traded, the Jets parted ways with Le’Veon Bell who went ahead and negotiated a deal with Super Bowl Contender Kansas City Chiefs. The Chiefs already have rookie running back Clyde Edwards-Helaire who has shown glimpses of being a star but an above average running back in his current state. With the uncertainty of what the Chiefs backfield will look like entering this week, we’d recommend avoiding both Le’Veon Bell and Clyde Edwards-Helaire. If you had to start one, we’d recommend going with CEH as he has proven himself and we’ve seen the dynamic that he has had with the Chiefs offense thus far. We don’t know what to expect with Le’Veon Bell in the mix and we’d look at keeping him out of fantasy lineups until we have a better understanding of the interesting backfield.

David Montgomery – David Montgomery has benefited in the wake of Tarik Cohen’s ACL injury. The Chicago Bears are 5-1 to start the season but this record hasn’t been due to their offense by any means. The Bears defense have carried them to the 5 wins but their offense has already turned the ball over from Trubisky to Foles. The running backs have been underwhelming this season and the Bears offense hasn’t produced much output. Montgomery hasn’t produced the yards we expected from him to begin the season and the Rams will be a tough test allowing very few yards to even top-tier running backs this year. The one way that Montgomery can be a manageable fantasy starter is if he is able to garner receptions in this game. The Rams allow running backs to get easy receptions and this can be the entry way for Montgomery to be worth starting but that’s a big part of his game that’s too risky to rely on.